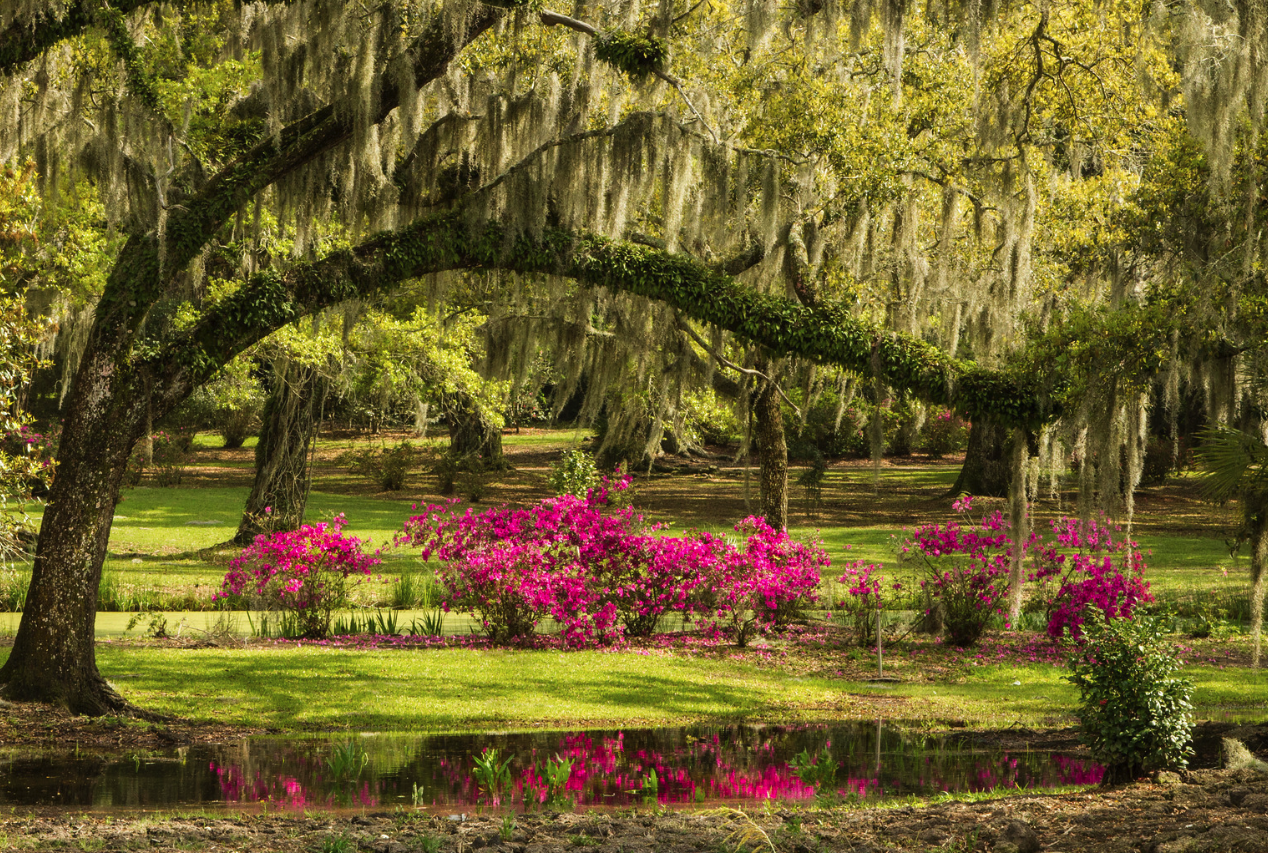 If spring of 2020 has taught us anything, it’s that outdoor spaces are a saving grace. Public gardens are an especially wonderful escape, not only for visitors but landscaping and horticultural professionals as well. Any trip to Louisiana must include Jungle Gardens, located on Avery Island about two hours west of New Orleans.

No doubt you’ve heard of the world-famous TABASCO sauce. But what you may not know is that it’s produced on Avery Island, one of the most enchanting spots in the South. Adjacent to fields of pepper plants is Jungle Gardens, a 170-acre oasis open to the public and a fascinating place for anyone interested in plants.

After the banking industry crashed following the Civil War, Edmund McIlhenny and his wife, Mary Eliza, left New Orleans for her family’s sugar plantation on Avery Island. Looking for a new business venture, Edmund planted his first pepper crop in 1868, and using a little salt from the local mine along with some vinegar, TABASCO sauce was born.

A Passion for Plants

Edmund and Mary Eliza’s son, Ned McIlhenny, was a naturalist and ornithologist. He documented the flora and fauna on the 2,000-acre property. Around 1895 at the age of 23, he founded a private bird sanctuary.

Along with peppers, Ned planted and cultivated hundreds of varieties of camellias, 64 varieties of bamboo and countless exotic botanicals from all over the world. In 1935, he opened Jungle Gardens to the public.

Garrie P. Landry, a retired professor from the University of Louisiana at Lafayette, began working for Jungle Gardens as their Botanist and Herbarium Curator about four years ago.

“I’ve been exploring the gardens and identifying species planted by McIlhenny that have been lost over time,” says Landry. “We’re talking about several hundred species here.”

Landry has uncovered such treasures as hidden camellia groves to Chinese trees rarely found in the United States.

“McIlhenny was good friends with David Fairchild, a botanist with the USDA,” says Landry. “Back in the early 1900s, Fairchild oversaw the importation of exotic plants from Asia and sent them directly to McIlhenny to try. You could call Avery Island one of the first trial gardens in the United States.”

After closely monitoring a set of trees and waiting for them to flower, Landry was able to make an identification: a Daphniphyllum macropodum. He verified its arrival on Avery Island with a receipt from a Japanese nursery in McIlhenny’s old files. It was dated Nov. 24, 1919. Landry has also discovered a rare hybrid between the native sweet gum with the Asian sweet gum that occurred naturally in the gardens over time.

Jungle Gardens is also home to the largest grove of giant timber bamboo outside of China, Landry says. Each February, Jungle Gardens hosts the American Bamboo Society whose members monitor the grove.

“McIlhenny was one of four grant recipients for timber bamboo from the USDA back in 1912, and his transplants were the only ones that survived,” says Landry. “Today, the grove so large, it’s visible from Google Earth. The sheer size will blow your mind.”

Camellias have also been a major source of recent study, and according to Landry, Jungle Gardens is home to more camellias than any other place in North America.

“We recently discovered a grove of 42 camellias engulfed by bamboo over the decades,” he says. “One of the groundsmen found another grove inside a mature forest just beyond Jungle Gardens. We found 22 rows of camellias as far as the eye could see. They have to be 80-years-old.”

Jungle Gardens is forging new trails for visitors to experience the fabulous finds.

“The grounds crew have created a woodland trail, about a 15-minute walk through the old camellia nursery, that includes a spectacular bridge over a beautiful gully. We’re excited to share the new addition with the public as soon as we reopen.”

While Jungle Gardens offers self-guided tours either by car or by foot, Landry gives customized tours for special groups or individuals interested in learning about the incredible plant collection on Avery Island. You can email him at garrie_Landry@mac.com.

Top 10 Gardens in the South

Don’t miss the other gardens on our list including Bellingrath in Alabama, Bok Tower Gardens in Florida, Crystal Bridges in Arkansas, Cheekwood in Tennessee, Reynolda Gardens in North Carolina and Dallas Arboretum and Botanical Garden in Texas. Stay tuned to see who’s next!