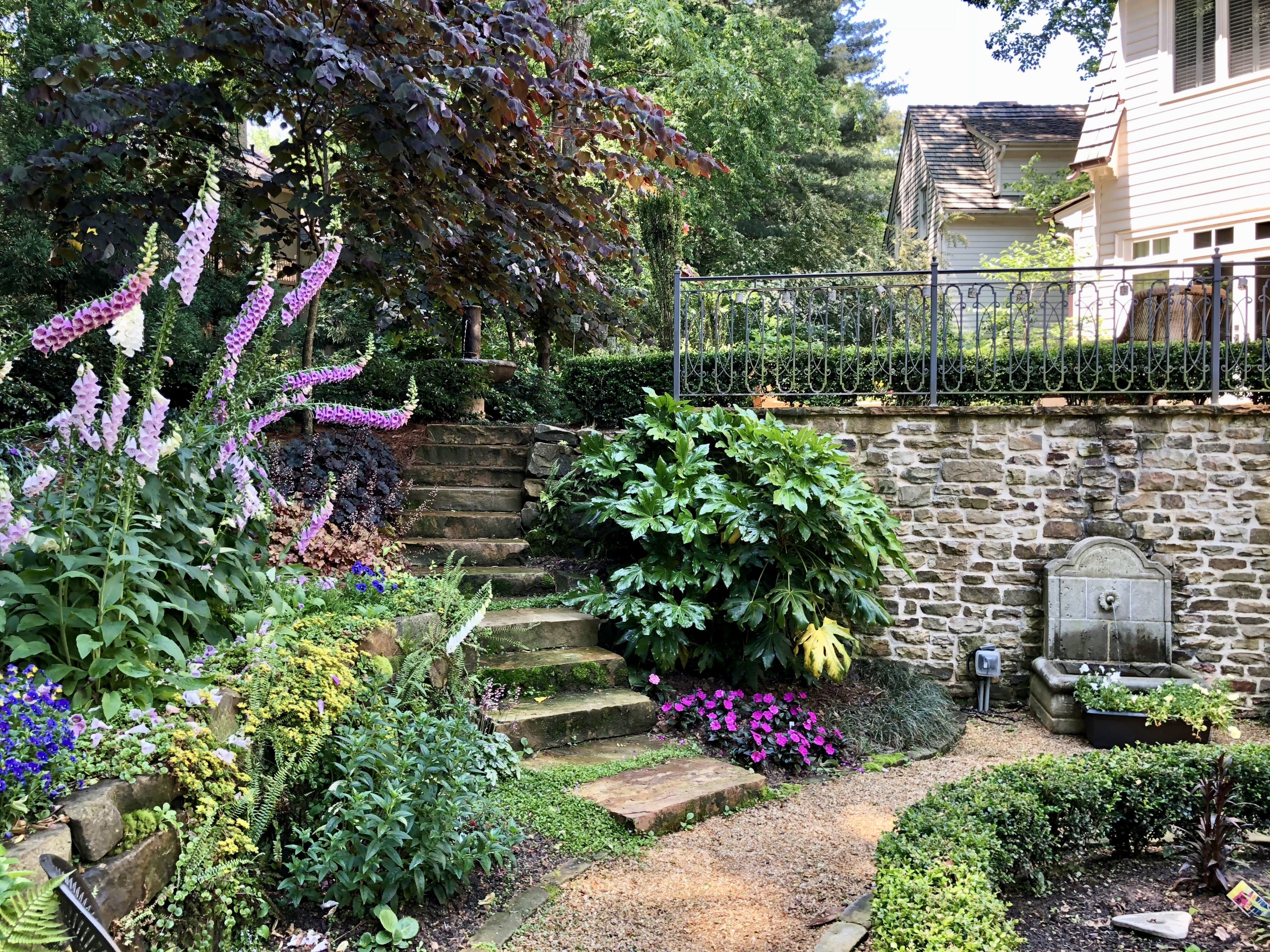 When avid Atlanta gardeners bought a new home with several major challenges, they called on King Landscaping to help transform their property.

Landscape architect Eric King had worked with the clients before and knew they were drawn to a European style. The homeowner is from England and he and wife were inspired by a recent trip to Italy.

“Their property backs up to community woods, and we really wanted to borrow the landscape, open up that view and transition their house to the garden to the woodlands with lots of plants,” says King. “The deck was not only falling apart, it was completely in the way.”

The home is on a sloped property downhill from the community woodlands. The old deck—which jutted out from the home’s second floor living area—acted as a fortress against water that would run down the yard in a storm. As a result, the wood had warped and rotted over time.

Once the deck was removed, lots of structural work had to be done. King built a massive concrete and stone veneer retaining wall. The wall serves as important support while also dividing the upper patio space and the lower perennial garden.

To keep moisture away from the home, King created a narrow gap between the wall and the exterior of the house. From the second-floor living room doorways, King used a narrow strip of IPE decking to bridge the gap between the house and the new raised patio. He selected a finish complementary to the wood flooring inside the home, which is visible through the wall of doors.

“We had to re-route all down spouts and sculpt the land to move the water away from the house through terracing and grading,” says King. “The clean hardscape surface catches water and diverts it away from the house, running under the IPE Decking and into a storm drain.”

Through discussions with Tony Reaves the home remodeler and Tish Mills the interior designer, the project evolved, and the team created a connected path to the outdoors.

“Part of my job is to realize the clients’ vision and read between the lines to understand the client’s needs,” King says.

King brought in over 150 cubic yards of fill dirt and topsoil. His team installed Wintergreen Korean boxwood, white Incrediball hydrangeas and Sasanqua camellias. His team also planted magnolias and Thuja green giant cryptomeria at the start of construction so they’d have time to grow and fill out.

“Our overall design is more formal at the top near the house and less formal as you get farther away,” he says. “I wanted to give the clients the structure and bones of the garden and still leave them room to ‘garden,’ themselves.”

Below, King installed a perennial garden, more walkways and a fountain as a focal point on the stone wall. New plantings blend in well with the established plantings of the woods, providing a rich texture.

The entire job cost around $100,000 and took one year—six months for design and six months to build.

A member of the American Society of Landscape Architects, King earned a master’s in landscape architecture from The University of Georgia and a master’s of business management from Georgia State University. He is also an instructor for Emory University’s Landscape Design Certification Program, a program he helped launch and develop. King lives with his family in Sandy Springs, Georgia.