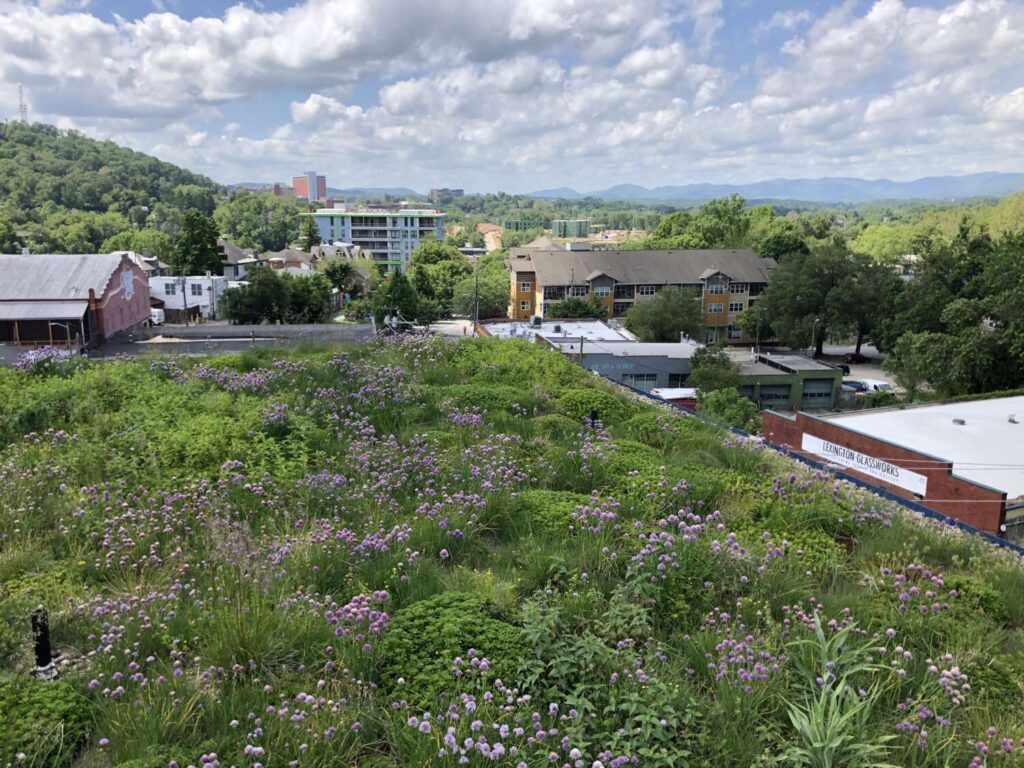 Nestled on Lexington Avenue in the heart of downtown Asheville, North Carolina is an apartment building that offers a unique and distinguishable feature. Situated on top of the building is a beautiful 8,200-square-foot green roof that can be seen and enjoyed by surrounding buildings, guests at a neighboring hotel pool deck, and people walking the city’s hilly streets.

The roof is a meadow and supports a diverse plant community focused on pollinator habitat and food sources. It seems only appropriate since Asheville was the first city in the United States to be certified as a Bee City USA.

Native plant species with high pollinator value, such as Asclepias tuberosa, Eryngium yuccifolium, Pycnanthemum muticum, and Rudbeckia fulgida, were selected to promote biodiversity and a thriving urban habitat for pollinators such as bees, moths, butterflies and birds.

Beginning in the spring and continuing through fall, the roof teems with different species of pollinators doing their important work. During the winter, seed heads and old flower stalks provide food and habitat for our permanent bird residents.

Installed in tandem with the building’s construction in 2017, the green roof system begins above the roof membrane. It includes a roof protection layer (a fleece fabric made from recycled materials), a drainage layer, filter fabric, and green-roof growing media. The growing media is composed of a blend of expanded slate, compost, and fines (such as sand). The growing media depth is 6 inches to support a diversity of plant species.

The building was new construction and designed to support the green roof. Toward the end of the building’s construction process, a crane lifted the materials to the roof for the crew to install. Once the growing media was prepared, an irrigation system was installed. Then the plants were arranged according to the planting plan, planted, and watered in. The roof continues to be maintained with monthly visits during the growing season.

In addition to providing breathtaking views and access to nature in an atypical locale, this green roof also provides an array of other benefits. Asheville faces climate challenges related to increasing temperatures associated with the urban heat-island effect and a documented reduction in the city’s urban tree canopy over the last several years. This green roof helps to serve as an important counterweight to rising temperatures in downtown Asheville by keeping the apartment’s rooftop temperature cooler during the hottest months.

The green roof also serves as an extraordinary stormwater management tool. A stormwater analysis for this green roof modeled the total stormwater retained and detained at peak flow levels using historical rainfall data. The study found that this green roof retains all rainfall up to one inch of rain and annually prevents over 100,000 gallons of stormwater from entering public storm drains. Rainwater is absorbed by the plants, then released into the atmosphere through evapotranspiration.

Even for a 10-year storm and a 25-year storm, this green roof reduces total runoff volume by 69 percent and 59 percent, respectively. This can have a major effect in reducing the amount of water rushing into our stormwater system during historical weather events, thereby reducing the potential for damaging flooding and overburdening our stormwater infrastructure.

Green roofs like this one on Lexington Avenue can have a dramatic effect on preventing pollutants and sediments from rushing into storm drains and ultimately making their way to our area’s creeks, streams and rivers. Because of their ability to retain and detain stormwater, green roofs can serve as a useful tool for meeting municipal stormwater requirements. They also can afford more flexibility to designers who may no longer need an underground cistern or retention pond to meet city stormwater management requirements.

In addition to the environmental benefits of promoting biodiversity, combating rising downtown temperatures, improving air quality, and helping reduce stormwater runoff, the roof also provides some compelling economic benefits. Green roofs extend the lifespan of a traditional roof by at least three times. This can significantly reduce the lifecycle costs of maintaining a roof over time. By helping to control rooftop temperatures during the city’s hotter months, the green roof also serves to reduce costs for cooling the apartment building.

So next time you are walking the streets of Asheville, keep an eye to the sky. As Asheville property owners continue to adopt green-roof technology and create a thriving network of green roofs like the one on Lexington Avenue, we can envision a future where the city’s rooftops provide crucial habitat with newly created biological corridors. And, we can imagine a day when green roofs can help Asheville become a more resilient city in facing emerging climate challenges.

Emilio Ancaya, GRP (Green Roof Professional), is the cofounder of Living Roofs Inc., a green-roof company based in Asheville. He has extensive experience with all types of green roofs, having designed, supervised and installed projects throughout the Southeast, Northeast and western states. Connect with Emilio at livingroofsinc.com.