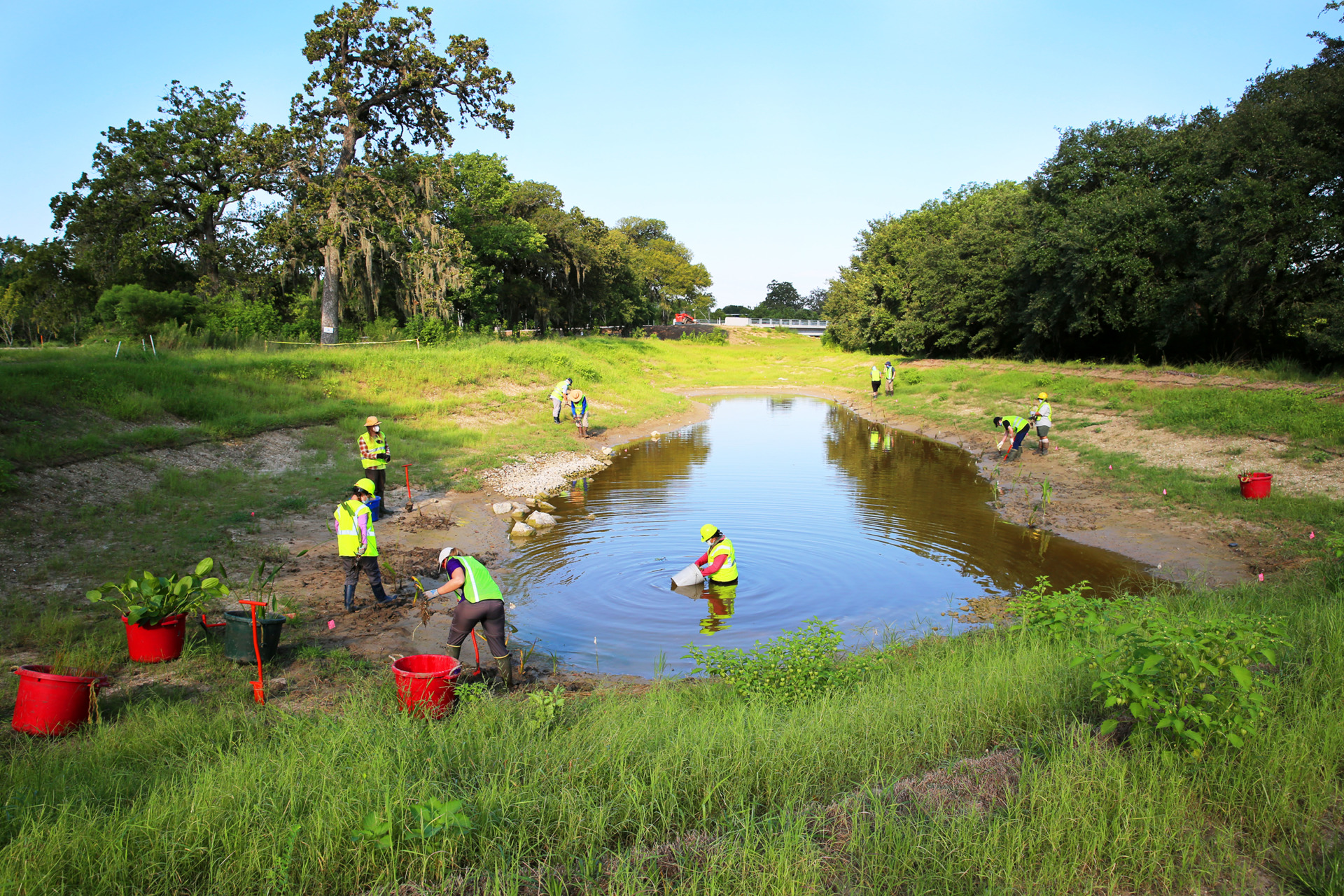 This article was originally published in AgriLife Today by Paul Schattenberg. Paul is a media relations specialist and member of the news editing team of the Texas A&M AgriLife Communications department of the Texas A&M University System.

“The wetland area was designed to collect rainwater that runs off of the parking area and other hard surfaces at the garden,” said Christie Taylor, AgriLife Extension program specialist, Houston. “Water is stored in the wetland for up to 72 hours, which helps reduce downstream flooding and also gives time for specialized wetland plants and soil to remove pollutants from the water.”

For example, Taylor said, hydrocarbons from car oil and heavy metals collect in parking lots and then wash into Houston’s bayous and ultimately Galveston Bay.

“Stormwater wetlands like the one at Houston Botanic Garden can help remove these pollutants from the water before it reaches Sims Bayou,” she said.

Planning for the wetlands at the botanic garden took two years. The planting process will continue through the end of the year. Master Naturalists, Boy Scouts and other volunteers from the community previously involved in AgriLife Extension programming in the Houston area have been at the forefront of the wetland planting.

“The wetland site was divided into three basins with connecting land bridges,” Taylor said. “We divided volunteers to work in each of the basic areas with no more than 10 working in one basin area at a time.”

Native plants that can handle the Houston cycle of wet and dry weather will fill the botanic garden’s stormwater wetland area. These plants create habitat for wildlife, including herons, egrets, ducks, dragonflies and many species of frogs and small fish.

“A variety of wetland plants were selected to showcase the wetland at Houston Botanic Garden including Louisiana iris, yellow waterlilies, swamp lilies and several grasses and sedges,” said Charriss York, AgriLife Extension program specialist in recreation, park and tourism sciences, Houston. “This variety of plants creates a wetland that looks nice all year long and also provides the food and shelter needed for wildlife.”

She said when completed the 5-acre wetland area will contain more than 25,000 plants.

A Natural Way to Reduce Flooding

Monty Dozier, head of the AgriLife Extension Disaster Assessment and Recovery Unit, said wetland projects like this are an excellent example of using natural practices to mitigate flooding.

Another example, Dozier said, is the Exploration Green project in which AgriLife Extension has been involved in Clear Lake City, near Houston. The project, which received a 2018 Excellence in Green Infrastructure Award from the U.S. Environmental Protection Agency and National Association of Flood and Stormwater Management Agencies, has transformed a former golf course into a 200-acre nature park and stormwater detention facility.

According to York, for more than a decade AgriLife Extension staff and volunteers planned and implemented features to repurpose the golf course and surrounding area into green space, water detention basins and recreational areas.

The wetlands of the Exploration Green project were designed to detain and slow floodwaters and clean the runoff from 95% of the storms that occur in the community. They help provide flood protection for several hundred homes in the Clear Lake area.

“We are pleased that Houston Botanic Garden is also showcasing this practice that can be used throughout Houston to relieve pressure from flooding,” Dozier said.

York said project delays due to construction and COVID-19 pushed back the start of wetland planting to August.

“However, not even triple-digit temperatures combined with mask and social-distancing requirements have dissuaded these volunteers from dedicating two mornings each week to planting the wetlands,” she said.

Houston Botanic Garden will open to the public in mid-September. The stormwater wetland, funded in part by grants from the Texas General Land Office Coastal Management Program, is one of the free amenities offered to the community. Tickets are required for additional garden collections.