Incredible Sculpture Is at the Heart of ST. PETERSBURG’s Pier District 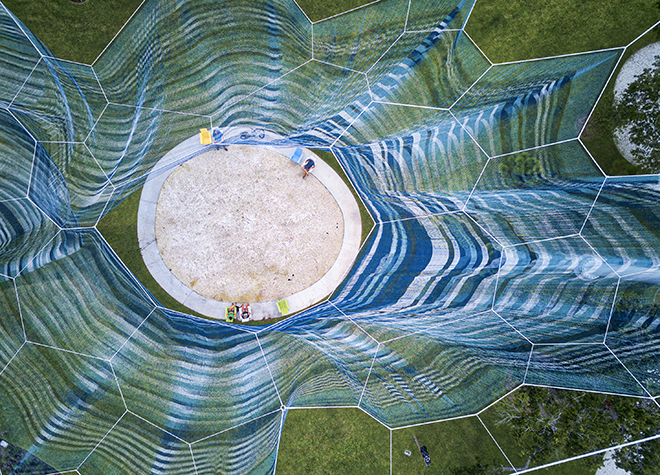 IN A NEW PIER DISTRICT, AN ARC BENDS TOWARDS JUSTICE

Along 2nd Avenue in St. Petersburg, Florida, an old pier launch built on landfill didn’t offer much beyond lots of parking and a long hot walk 3,000 feet out to a restaurant jutting into Tampa Bay. After a $92 million redesign, a new 26-acre walkable pier district now unites city and pier through a walkable green landscape that features Bending Arc, a new sculpture with a social justice message by net artist Janet Echelman, gardens, a playground and hundreds of newly-planted native Floridian trees.

The pier district project was planned and designed by multiple interdisciplinary teams. Barbara Wilks, FASLA, and her team at W-Architecture led the design of the 23-acre approach that brings visitors from downtown through the park space that features Echelman’s piece, her largest permanent installation to date. Architects at Rogers Partners and ASD/SKY Architect and landscape architects at Ken Smith Workshop designed a 3-acre plaza and pier found at the outer edge further into the ocean.

W-Architecture started with a master plan devised by AECOM, which the team then revised by “moving things around,” including roads, bus stops, and parking lots, and then layering in multiple transportation systems. There is now a tram line, bicycle paths, and new circulatory system for pedestrians. Wilks said: “if you use Google Earth, you can clearly see we transformed the space from a car dominated place to a pedestrian park.”

As visitors meander through the new landscape, there’s a gateway lined with palm trees, a marketplace with stalls for local artisans, the striking artwork, gardens with a playground and constructed pond, and a beach. The pier district was “designed as a series of events that draw you in. We choreographed how the experience will unfold.”

Conceptual landscape design was already moving forward when city leaders alerted Wilks that Echelman has been commissioned to bring one of her giant pieces to the park. On the phone over a weekend, they reached agreement on the location for the piece, which is called Bending Arc, in reference to Martin Luther King, Jr.’s words: “The arc of the moral universe is long, but it bends towards justice.”

Echelman named the piece Bending Arc and incorporated multiple arcing forms because the site played an important role in the movement for civil rights. The place was “where local citizens began peacefully challenging racial barriers, leading to the 1957 U.S. Supreme Court case ruling, which upheld the rights of all citizens to enjoy use of the municipal beach and swimming pool without discrimination.” St. Petersburg was also later known for the sanitation workers’ strike of 1968, one of the largest in the country in the wake of the assassination of King.

Echelman’s works are crafted for their specific locations and shaped by their surroundings. Raised in the Tampa Bay area, she was inspired by the colonies of barnacles that grow on the underside of piers and the blue and white parasols that can be found on St. Pete’s beaches. Her studio writes: “The sculpture’s design in aerial view can also be read as three barnacle-like parasols nestled together.”

On the ground, Wilks worked with Echelman to fine-tune the position of the artwork so it avoided existing trees. Wilks then created circular landscape forms below Bending Arc‘s three apertures where visitors can look up.

Circles are prevalent in the new pier district’s design because the local limestone landscape naturally forms round pools of water, which also results in trees forming a circle around the pools’ edges.

Under one aperture, a concrete lined circle is filled with oyster shells and forms an outdoor event space.

Below the two others, there are rounded grass-covered berms so visitors can more easily lie back and gaze at the pleasingly engulfing, undulating nets, which become even more dramatic at night. According to Echelman, the piece is “composed of 1,662,528 knots and 180 miles of twine, spans 424 feet, and measures 72 feet at its tallest point.”

Wilks purposefully designed the perimeter of the space with native oaks and pine trees to focus attention on Bending Arc. Diagonal pathways from the gardens direct visitors to the artwork. At some surrounding edges, bioswales with native plants — green infrastructure systems for managing stormwater — can be crossed by low wooden bridges.

Once visitors move past Echelman’s sculpture, they encounter gardens that contain a play space overlooking a new pond. Because W-Architecture planted native trees and plants, the site has become a mecca for wildlife, something its earlier incarnation as a parking lot could never have achieved.

From there, visitors can either veer towards spa beach or walk further out on the pier designed by Rob Rogers, Ken Smith, FASLA, and team. Pathways at the perimeters enable visitors to loop back to the central spine on bike or foot.

Wilks added that the park itself echoes the social justice message of Echelman’s artwork. “The new pier district is very much for everyone. It was designed to be free and open.” 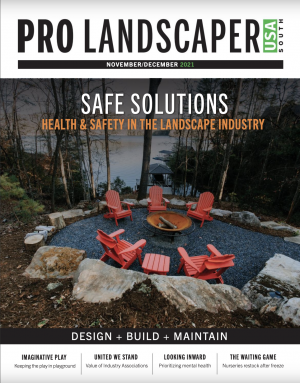